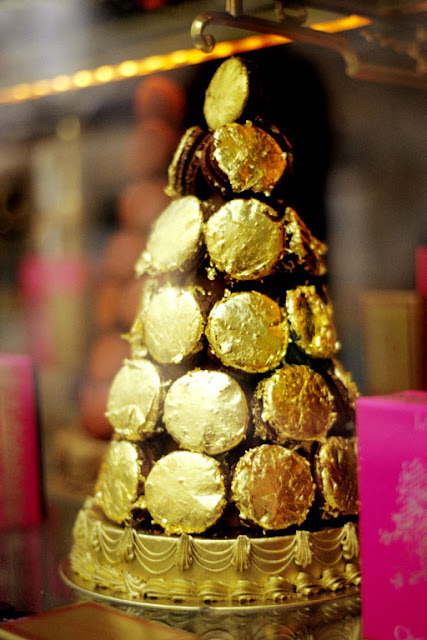 I don’t think there has ever been a gateaux more talked about than the French macaron. A day does not go past that I don’t read about these delectable little morsels. These light as air cookies seem to conjure up all that is romantic about France. They might not be an official symbol of the French capital but they are as well known and sought after as a ride to the top of the Eiffel Tower or a squizz at the Mona Lisa in the Louvre. A trip to Paris these days by definition means a taste of the macaron.

Are these meringue based confectionaries all that we dream of? Do they melt in the mouth, send our taste buds into overdrive and knock all thoughts of a serious regime out the window. I would answer this question with a resounding yes. I must qualify this ‘yes’ by saying that it depends upon which patissier has created the macaron and what flavour we are indulging in.


I remember my first bite as if it were yesterday. It was a caramel flavoured macaron from the Laduree tea rooms on the rue Bonaparte in the 6th arrondissement. I thought for a few moments that I had died and gone to heaven…sweet bliss in a bite. I had never tasted such exquisiteness. Crisp on the outside, slightly chewy in the middle and finishing with a creamy centre – my taste buds were in such a state of pleasure, I don’t think they have ever recovered or have been the same since. Many bites later, from many different patissiers and I still prefer Ladurée macarons over any others.


Which one to try? That’s up to you, but when in Paris, try one you must. There is no such thing as a disappointing choice; chocolate, bitter chocolate, rose, pistachio, caramel with salted butter, black current, violet, orange blossom, red fruits, liquorice or lemon – all available, all year. And depending on the season there are also coconut, almond, spice, praline or chestnut macarons.

There are several Ladurée boutiques and tea rooms in Paris but my feet always land outside rue Bonaparte…it’s my favourite. xv

My taste buds always seek out the lovely lemon perfection on rue Bonaparte!

Do you suppose…just maybe…they would survive a flight to Australia fresh and in one piece? I guess not so I am practicing like mad but I haven't quite got the little flat bit on the bottom right yet! The taste isn't too bad though and they are crisp, chewy and melty!
In OZ macarons are spelt macaroon and are full of coconut! Revolting!

It is not breakfast time yet, about 5AM, and my mouth is watering for the taste of a macaron, my favorite,blackcurrent, rose and lemon. My hotel is on rue de l'Univerite, a few sreps from Laduree and while in Paris, indulge I do. Since I often travel alnoe, I love seating in their quintessential tea room. Warning to travellers, Laduree has opened an outlet at C D G airport by the custom check in., terminal 2…

Oh Vicki – the porridge I am eating as I read this has suddenly turned to ashes in my mouth!! First stop Laduree – I have seen macarons being sold here but have resisted as I am saving myself for the 'real thing'! Susie x

Thanks for the yummy tip! I'll be in Paris next week and will be making a stop at Laduree. Yum!

Being a huge pavlova and meringue fan…but have never had the pleasure of a macaron. Does anyone know where one might mail order a decent macaron in the states???

They sound wonderful but different from the coconut macaroon that is most common in the U.S. I haven't had the French version but look forward to giving them a try!

"A squizz at the Mona Lisa…"

I think you can get arrested for that.

..You know…I lived in Paris for about 4 months while going to University. I have NEVER tried a macaron. Your description makes me sorry about that.Damn.

I'm soo curious.
Can you get these outside of Paris ?

What a heavenly description you give!! Sounds addictive to say the least,enjoy your day! Chrissy

I fell in love with macarons at Laduree…and I've been on a quest to find one as good in the US…so far a futile search!

Macarones are delicious! Dark chocolate is my favourite…Have a nice day!!!

Oh vicki, it is only 6:30 am and already "my regime " is out the window-even if I'm sinning only in thought. Have a wonderful day. xo

Vicki, sounds so scrumptious.
I wish had read this post two days ago. Just made Biscotti and choc chips for the Meds Troops in Iraq. My Cousins Daughter is a Dentist and said the Doctors enjoyed the last package. I had the coconut to do this. Day late.. That is some display

Yes yes I love macaroons!
the colors, the flavor, the parisian touch…

I need your help, Im planning to change my header and I need you opinion

Macarons are simply perfection in one's mouth. All those layers and textures are pure bliss to the taste buds. The thought of them makes me want to hop on a plane to Paris where I'll be sure to stuff myself silly. That photo is so beautiful, Vicki.

The gold leaf macaron pic is amazing! Exquisite! You are correct about the macarons being a fave subject amongst French blogs. I have never eaten one but admired from a distance. I am on a mission to make them this Easter and pray that they turn out. Never done it before, just relying on Martha Stewart's recipe.

Golden macarons…little jewels. My favorite location, too. I'm so happy for you that you are in Paris…I wish – well, you know.

OOHHHH-my stomach is growling, the drool is…never mind…
I LOVE macarons!!!
There's a small bakery in our town that makes a lovely lavender macaron.
I may crank up the truck , put her in 4 wheel and plow through the snow right now!
annie

Little Golden Delights Vicki, Pierre Herme just opened at Selfridges, Oxford Street this last Friday and passion fruit is one that I really want to try while here. We are also lucky enough to live close to Bouchon Bakery in Yountville, Napa who make excellent Macarons but
Ladurée is my ultimate goal lol. Pistachio are my fave so far. I have a weakness for Bonne Mamans Madeleines too.
Kathy.

Vicki,
Oh those gold ones this year are amazing! I can only imagine sitting up in Laduree at Madeline Castings salon with a cup of earl grey and a golden macaron. A perfect thought to my day. Thank you!
xx

Hi, I do not kommentelni, but a regular visitor to the blog, which is very like it, and you have a gift for you: http://christine-interiordesignroom.blogspot.com/2010/02/dijat-kaptam.html

Oh now you have me dreaming about my last trip to Laduree – what an experience. I dragged my husband into the shop, not knowing what it was but wanting to explore and OMG I was so glad I did. Their macarons are bliss! xox

Ooooh!!! I'm lucky to have found a French pastry chef here in Brisbane who makes very delicious and delicate macarons, so I have something to tide me over until I get to try them in Paris. The local ones are really lovely, but I'll be curious to see how they compare to those from Ladurée.

On a recent trip to Vence in the south of France – I ventured into a little macaron shop and purchased one pistachio macaron. The elegant french Madam gently placed it into a beautiful little box lined with pretty paper and then came around the counter and held the door open for me with a sweet bonjour!! I felt so.. special.

Vickie, I wish I had read your wunderful macaron words on this blog article before I had begun to post on this subject on my own blogsite!

I still have a couple of macaron postings to put up so I will recall your stimulating thoughts!

I much appreciate your writings on France.

You can get them to Australia but you must put them in your hand luggage and make sure noone dumps their junk on your mac's! They come in a very lovely box that is rather strong too. Roll a jumper around it all for extra protection!
Mine made it! :)

I love macarons, and the thought of them makes me want one this minute! Whenever I finally make it to Paris, visiting Laduree is high on my list of to dos!

I had a Mango & Passionfruit macaroon when we were in Melbourne last week. From a little store that had 'French Patisserie' written on the window. In was in Westfield Shopping Town Doncaster. Laduree has nothing to worry about.
Millie ^_^

I love macaroons… they're soo good… have a nice weekend!

I've found a LAC chocolatier in Nice they ake amazing macarons too!

Have a great weekend!
gaia

that image is truly stunning! perfect for a wedding:)
xx
callie

Oh, i would love to taste one of those macarons …anw, since reading about it i have some cravings i would like to satisfy, and i did a pistachio macarons in a patisserie in Camberwell, Vic Australia. It was crisp and chewy as you describe it. Anw, i will try the Lindt Cafe offerings one of these days, but i will definitely wishing a parisian taste of macarons from Ladure.

hummm. I'm not a sweets person per se, but I've been seeing these little colorful things everywhere lately and I guess I'll have to try them. I'm your newest follower. blessings, Lady

Thinking Of Paris And The Cligancourt Flea Market